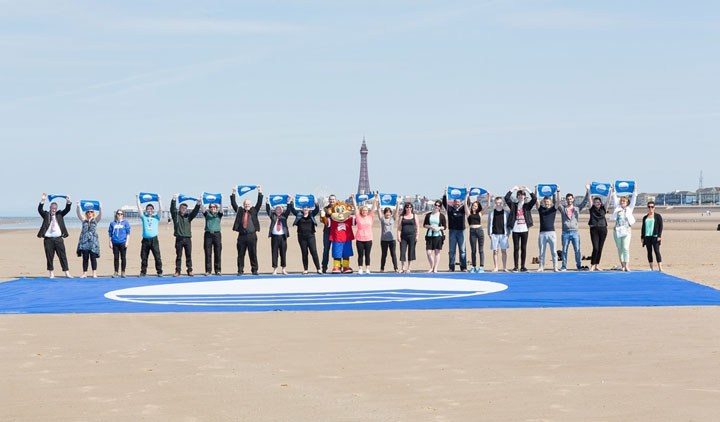 https://blackpoolunlimited.com/images/uploads/news-articles/Blue_Flag_190516_v2.jpg
Blackpool beach has been labelled amongst some of the best in the world after being awarded its first ever Blue Flag.
The stretch of beach at Blackpool South has been named in the list of Blue Flag beaches for 2016, putting it on a par with world renowned sites in all four corners of the globe, including in the Caribbean, Mediterranean Sea and the Pacific coastline.

The stretch of beach, which is located opposite Blackpool Pleasure Beach, became eligible for Blue Flag status after being classed as having ‘excellent’ sea water quality by the Environment Agency last year.

Blackpool is the only beach in the North West to have the prestigious Blue Flag in 2016 where its local facilities as well as access, cleanliness and public safety were assessed to make sure the beach reached Blue Flag’s very high international standards.

At the same time, three other areas of beach in Blackpool have been granted Seaside Awards for the third successive year, giving the resort an entire coastline of award winning beaches.

The accolade is a remarkable turnaround for Blackpool’s beaches, where heavy investment coupled with work with businesses, communities and public sector partners has contributed to making sure the town has a coastline to be proud of.

Today’s news is the culmination of years of work to improve the quality of the town’s sea water and adds an extra reason for people to visit Blackpool this year, according to the Deputy Leader of Blackpool Council, Gillian Campbell.

She said: “The amount of investment and effort that has gone into improving Blackpool’s sea water over the last few years is nothing short of phenomenal.

“Only four years ago every expert in the country was telling us we would fail the bathing water standards and have to put signs up advising people not to swim.

“That simply wasn’t an option for us and, through hard work with our partners as well as the hundreds of businesses and volunteers who have joined in with the LOVEmyBEACH campaign, we’ve now got an entire stretch of beach in Blackpool that we should all be immensely proud of.

“To have been awarded our first ever Blue Flag is an outstanding achievement and it’s another boost to our local economy as we secure our position as the UK’s number one seaside resort.

“Not only is it fantastic to be granted Blackpool’s first Blue Flag but to be the only one in the North West is a great honour which means Blackpool has to be to go-to choice for beach goers this summer.”

On top of the Blue Flag at Blackpool South, Blackpool North beach opposite the Tower, Blackpool Central beach and Bispham beach have also been given Seaside Award status.

As part of celebrating the announcement, a large Blue Flag will fly from the top of The Blackpool Tower today until the rest of the month.

The Blue Flag award scheme is run across the world but administered in the UK by environmental charity Keep Britain Tidy.

“We are also delighted to welcome Blackpool South beach to the Blue Flag Award – the international standard for the best beaches in the world – for the first time.

“Keep Britain Tidy works with people and organisations who share our vision that everyone should have access to quality outdoor spaces where they live, work and holiday.

“The fact that 143 beaches will be flying a Blue Flag or Seaside Award this summer is testament to the continuing hard work of everyone involved. They know that quality beaches are great for the local communities, visitors and local businesses”.

Since 2011 the Fylde Peninsula Water Management Partnership, made up of public and private sector companies, has worked to increase investment in the area’s sewer network, as well as creating teams of volunteers and businesses to look after the quality of the Fylde Coast’s seas.

United Utilities has invested more than £600m along the Fylde Coast on schemes to capture and treat wastewater since the early 1990s. Most recently, this included a huge storage tunnel system at Preston to improve the Ribble Estuary.

The water company is carrying out a further £100m worth of infrastructure improvements across the Fylde coast, including the storm water storage tank and new outfall pipe at Anchorsholme Park.

Sarah Jenner, Environmental Strategy Manager at United Utilities, said: “We are thrilled for Blackpool that all the hard work is now paying off. It’s
amazing to think how far we have come over the last 20 years. The challenge continues, but it shows just what can be achieved through partnership and determination.”

The public LOVEmyBEACH campaign has also helped to improve sea water quality, with messages around looking after the water reaching thousands of people across the North West, as well as hundreds of volunteers doing Fylde coast beach cleans and many local businesses signing up to be responsible companies.

Paul Hickey Deputy Director of Water Quality at the Environment Agency said: “The Blue Flag Awards from Keep Britain Tidy are an excellent initiative to inform the public about enjoying a day at the beach.

“To ensure there are so many brilliant beaches to choose from we’ve been working with a range of partners to protect and improve water quality at popular swimming spots.

“We encourage people to check water quality results which are available to beach-goers our bathing water explorer website.”

To find out more about the work being taken across the North West to improve bathing water quality, visit www.lovemybeach.org.